A $15 million remodel and new branding has transformed a landmark hotel in Bloomfield Hills into a “warm, energetic, modern, chic,” DoubleTree by Hilton.

“You walk in and we want you to feel like we’re taking you to a place that doesn’t exist in the market and we hope we’re hitting on all the notes,” co-owner Zaid Elia said during a ribbon-cutting and grand opening Dec. 6.

Elia and Shiffman bought The Kingsley Inn in 2014, when it was under the Radisson flag. The pair switched the name back to The Kingsley Inn in September that year and signed with Hilton in 2017. They closed the hotel, which was built in 1958, in June 2017 for renovation. Its last remodel was in 1997.

“It was a very long, thoughtful process,” Elia said. “The total construction budget was in excess of $15 million and, from our perspective, it was money well spent.”

The size of the 150,000-square-foot hotel didn’t change, but the number of rooms went from 151 to 144. The lobby bar and deli restaurant were expanded. Food and beverage service also will be available in the new Kingsley Courtyard when it opens in the spring.  Removing a few guest rooms on the second floor opened the lobby, giving it a more spacious feel with a high ceiling.

“The overall footprint didn’t change, but there was not one square inch of this property that we did not remodel or upgrade,” Elia said. 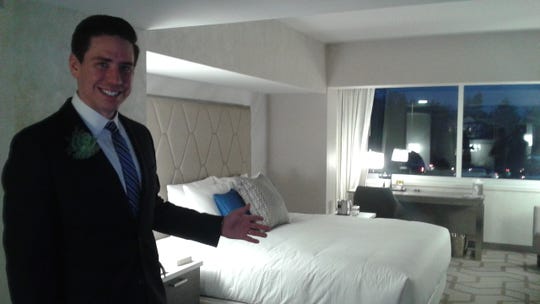 William Bornheimer, general manager, shows off a junior suite that faces Woodward Ave. The room’s balcony was enclosed, which added a seating area with a desk. Bornheimer said many rooms on the Woodward Ave. side of the hotel have been booked for the Woodward Dream Cruise next year. (Photo: Sharon Dargay | hometownlife.com)

“We wanted to keep the look modern and very clean. We have a lot of neutrals and calming colors,” said general manager William Bornheimer, a Northville resident who previously managed hotels in New York. Wall art — scenes of old Detroit — are black and white with a pop of color that coordinates with bed pillows.

Bornheimer said the hotel is projected to open Dec. 19, but started taking reservations while still under construction. A wedding is booked for January and many of the rooms facing Woodward Avenue have been reserved for the Woodward Dream Cruise in August next year.

The balconies on rooms facing Woodward were enclosed, creating a sitting area inside the room and a view through windows.

“We did a study and people don’t really want balconies. They don’t need them, especially facing Woodward. One of the complaints I read was that the rooms facing Woodward were so noisy,” Bornheimer said, showing off a junior suite that overlooks the busy thoroughfare. “We’re here, it’s rush hour, and you don’t hear a single sound. All of these rooms are almost all booked for the Dream Cruise. You get a perfect view.”

Bornheimer said the new hotel is one of the largest employers in the area, with approximately 68 employees helping to open the hotel and restaurant and approximately 100 when it’s fully staffed.

The restaurant, Zalman’s Delicatessen,  is expected to open by Dec. 14 and will offer all-day breakfast, salads, sandwiches, soups, sides, appetizers and desserts.

“We want to be the quintessential New York deli,” Bornheimer said. “We’ll be doing all the pastrami, corned beef, all that we’ll be making and smoking and braising in-house. The pastrami sandwich is going to be fantastic.”

The theme at the hotel’s The Duke Cocktail Lounge centers on Hollywood from the 1920s to ’40s and is named after actor John Wayne. Its signature drink, The Duke, is a version of an old-fashioned, with barrel-aged Jameson whiskey, simple syrup and orange and cherry bitters.

Elia said he recalls eating brunch at The Kingsley Inn with his parents when he was growing up.

“I had a natural affinity for the site. When I had an opportunity to purchase the property, I jumped at the chance. The history of the site speaks for itself,” he said. “Creating a vision that was going to be so positive in the community was a little bit nerve-wracking. So my partner and I went to the drawing table and we decided that for us, this is a passing of the torch. It was a good time to create an experience for the community and build upon the good will that the property already had.”